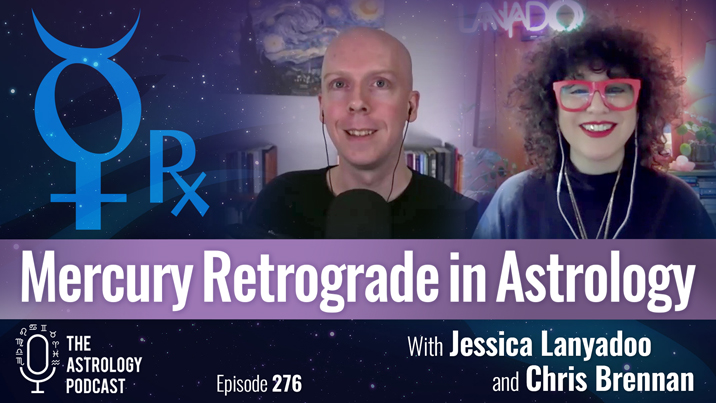 In episode 276 astrologer Jessica Lanyadoo joins the show to talk about Mercury retrograde and what it means in astrology.

Mercury retrograde periods occur when the planet Mercury begins moving backwards in the zodiac for about three weeks every few months.

Astrologers generally associate Mercury retrograde periods with miscommunication, delays, technological snafus, and other issues in the areas associated with Mercury.

During the course of the show we talk about the significations of Mercury, the astronomy of Mercury retrograde periods, shadow periods, and share some stories about how we have seen these periods manifest in the past.

Astrologers have been talking about Mercury retrograde a lot recently since one is happening in the three weeks leading up to election day in the US on November 3, and it seemed timely to talk about the phenomenon in general, as well as how it might relate to the election.

Jessica recently launched Zodiac the Vote, which is encouraging people to get out and vote, and providing guides to make it easier to avoid possible Mercury retro snafus:

Watch The Video Version of Our Mercury Retrograde Episode

Here is the video version of our Mercury retrograde episode on YouTube:

Episodes
Mercury Retrograde and What it Means in Astrology
Episode 274