The Origins of the Concept of Detriment in Astrology 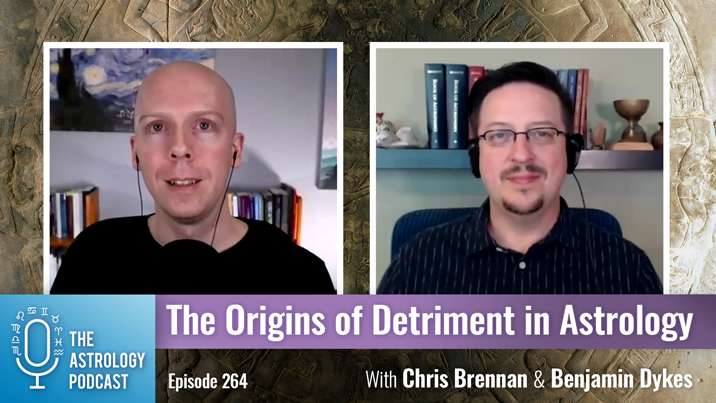 In episode 264 of the podcast Chris Brennan and Benjamin Dykes discuss the origins of the concept of detriment in ancient Hellenistic and Medieval astrology.

Years ago I noted that that the origins of the concept of detriment are somewhat mysterious, because it is mentioned infrequently by the Hellenistic astrologers, and not usually defined along with the other classical “essential dignities” of domicile, exaltation, and fall.

Then suddenly in the work of Rhetorius of Egypt, the last major Hellenistic astrologer who lived around the 6th or 7th century, detriment is present as a full-blown concept and is treated together with the other essential dignities.

In my book Hellenistic Astrology: The Study of Fate and Fortune, I surmised that this meant that either A) detriment had developed as a new concept by the late Hellenistic tradition, or alternatively B) that Rhetorius was simply formalizing a concept that had been taken for granted by some earlier astrologers.

At the time that I published my book in 2017 I felt like I had found enough references to the concept in the earlier Hellenistic tradition to indicate that Rhetorius didn’t invent the concept out of nowhere, but instead he was drawing on an earlier tradition.

My focus, then, became on establishing a set of English terms to refer to the concept, since the Greek term enantiōma that Rhetorius used just meant “opposition” or “contrariety”. I ended up settling on the terms “adversity,” “exile,” and “antithesis.” Some of this process was discussed in episode 44 of The Astrology Podcast.

Then a couple of weeks ago I came across and article written earlier this year by Anthony of Seven Stars Astrology titled Detriment: A Questionable Distinction.

In this article Anthony, who is familiar with my earlier work on this issue due to taking my Hellenistic course and reading my book, did a survey of Hellenistic and early medieval references to detriment in order to show how infrequently the concept is mentioned, and to call into question the conclusion I made about its development in my book.

While some interesting points were made in this article, it was clear that some references to detriment in the earlier Hellenistic tradition were being overlooked or not recognized for what they were, or in some instances downplayed as possible interpolations.

This prompted me to go back and do my own survey of references to detriment in the Hellenistic tradition with Levente László of the Horoi Translation Project, and we found a number of new references that had not been noted in any previous studies.

We are releasing the results of that survey today to coincide with the release of this podcast episode, as an additional handout to accompany the discussion:

References to the Concept of Detriment in Hellenistic Astrology

These references leave no doubt that the concept of detriment originated in the earlier Hellenistic astrological tradition, going back to at least the 1st and 2nd centuries CE.

Anthony declined an invitation to join me on the podcast to discuss this topic.

When I spoke to Benjamin Dykes about it, he sent me a document he had been preparing for his upcoming course on medieval astrology where he did a survey of references to the concept in the early medieval tradition. Sign up for the newsletter on Ben’s site to get a notification when the course is available:

Ben classified the references into three groups in terms of how the medieval astrologers were conceptualizing detriment:

Ben agreed to join me on the show to discuss this issue, and to review some of the different references that we found, in order to get a better understanding of the origins and use of this concept in traditional astrology.

Watch the video version of this episode on the origins of the concept of detriment: