The Four Elements in Astrology, with Darby Costello 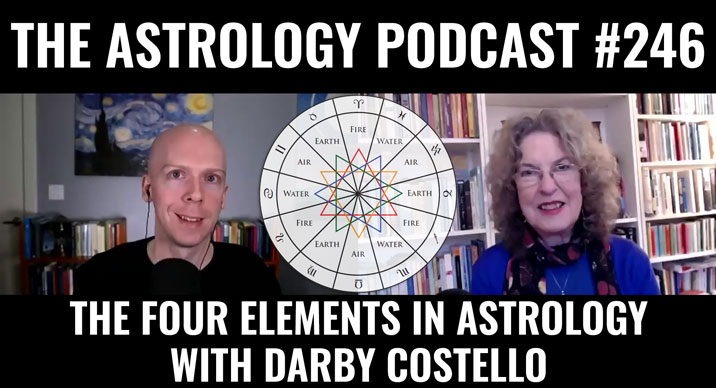 Episode 246 features a discussion with astrologer Darby Costello about the four elements in astrology, and the way their archetypal meanings are applied to the signs of the zodiac.

The four classical elements in the western tradition are: fire, air, water, and earth.

The concept of the four elements originated in the Greek tradition with the pre-Socratic philosophers, and especially Empedocles in the 5th century BCE, with additional contributions later by Plato and Aristotle.

The four elements have been applied to the triplicities since at least the 1st century BCE, and Chris published a paper in 2013 showing how the assignment of the elements to the signs of the zodiac was based on the planetary joys scheme.

During the course of this episode we talk about how Darby got into astrology, the history and philosophy behind the elements, and how they are applied to the signs of the zodiac to create pairs of signs with antithetical elemental qualities.

For more information about Darby’s work visit her website:

Here is the video version of our discussion about the four elements:

Episodes
The Four Elements in Astrology, with Darby Costello
Episode 244