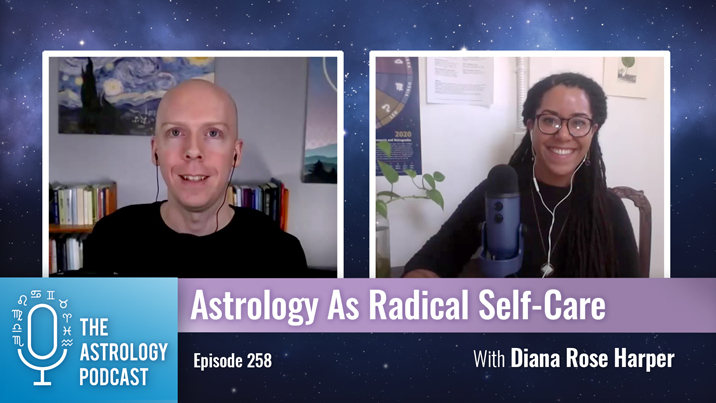 In episode 258 of the podcast astrologer Diana Rose Harper joins the show to talk about her work in using natal astrology as a form of radical-self care.

This discussion was based on a talk that Diana gave at the Northwest Astrological Conference last month titled Fierce Compassion: Natal Astrology as Radical Self-Care.

The focus is getting at the causes or the roots of why certain forms of self-care are required in this day and age.

This involves digging into the things that influence our sensation of worthiness as well as our judgement of other people’s worthiness in our lives and in society in general as well.

Within this context, self-care that is not only about you, but also about the world around you, and provides a structure to help support individuals in being the good people they aspire to be, in a way that is more foundational and enduring.

This episode expands on some themes discussed in episode 19 of the podcast with Ben Dykes, titled Objective Versus Subjective Reality in Astrology.

Later in the episode Diana and I spend some time going through the 12 houses to consider each of them within the context of radical self-care.

Diana’s full NORWAC talk is available for purchase on her website:

There are also two free handouts that give exercises for radical self-care and links to resources:

You can find out more information about Diana on her website and social media:

Here is the video version of my interview with Diana Rose Harper: