The Origins of the Exaltations: A New Discovery 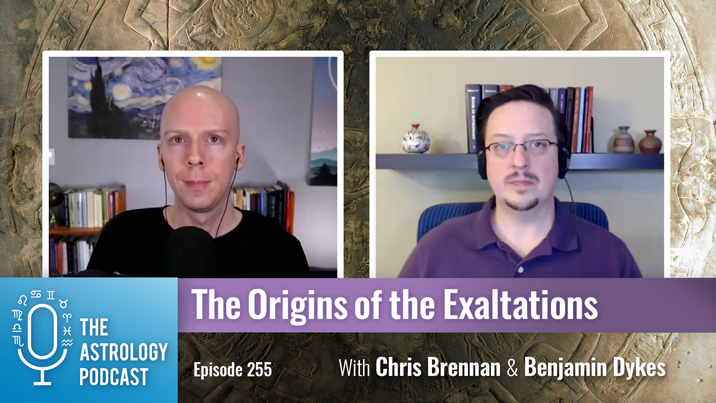 In episode 255 of the podcast astrologers Chris Brennan and Benjamin Dykes unveil a new discovery about the origins of the exaltations, derived from a lost Hermetic text preserved by Abu Ma’shar.

Last summer Keiji Yamamoto and Charles Burnett released their long-awaited translation of The Great Introduction to Astrology by the 9th century astrologer Abu Ma’shar. This was the first time this text has been translated into English in its entirety.

I received my copy on July 30, 2019, and the most interesting thing I found was that Abu Ma’shar frequently cites a lost Greek text attributed to Hermes Trismegistus. This appears to be the same text called the Panaretos that the 4th century astrologer Paulus Alexandrinus drew on for his treatment of seven planetary Lots, although Abu Ma’shar shares much more from the text than Paulus did.

The most interesting pieces of the Hermes material preserved by Abu Ma’shar is that it contains a set of rationales for the domicile and exaltation schemes that are unique, and it seems to preserve what may be the original conceptual rationales for both of those schemes.

I first talked about this discovery in episode 26 of the Casual Astrology Podcast, which was released on September 18, 2019. I urged Ben to look into it to help confirm the discovery, and over the past several months he worked on his own translation of Abu Ma’shar from the Arabic, which he finished and shared with me on May 8, 2020.

Ben was able to confirm that most of the math for the exaltation degrees seems to work out, and so with that confirmation we decided to record this episode to present this discovery and talk about it on May 13, 2020 around 5:15 PM MT.

We begin the episode by providing some background information on the text, and then eventually transition into a summary of the arguments presented by the text for how to derive the exaltations of the planets and their degrees.

Interestingly, the arguments for the domiciles and exaltations presented by this text are firmly rooted in the tropical zodiac, and this raises some major questions about previous assumptions that the exaltations had their origins in the sideral zodiac and the earlier Mesopotamian tradition.

The discovery also raises questions about the extent to which Hellenistic astrology, and western astrology in general, partially represents a sudden invention or technical construct that was put together sometime around the 1st century BCE.

This is kind of visually intensive episode, and our friend Paula Belluomini made a number of diagrams to help illustrate the concepts, so I would recommend watching the video version of the episode if you can.

Ben plans to publish his translation of the Great Introduction by Abu Ma’shar sometime in the next few months, and you can signup for the email list on his website to receive a notification when that is released:

Watch the Video Version of This Episode on the Exaltations

You can watch the video version of this episode on the exaltations here:

Episodes
The Origins of the Exaltations: A New Discovery
Episode 253